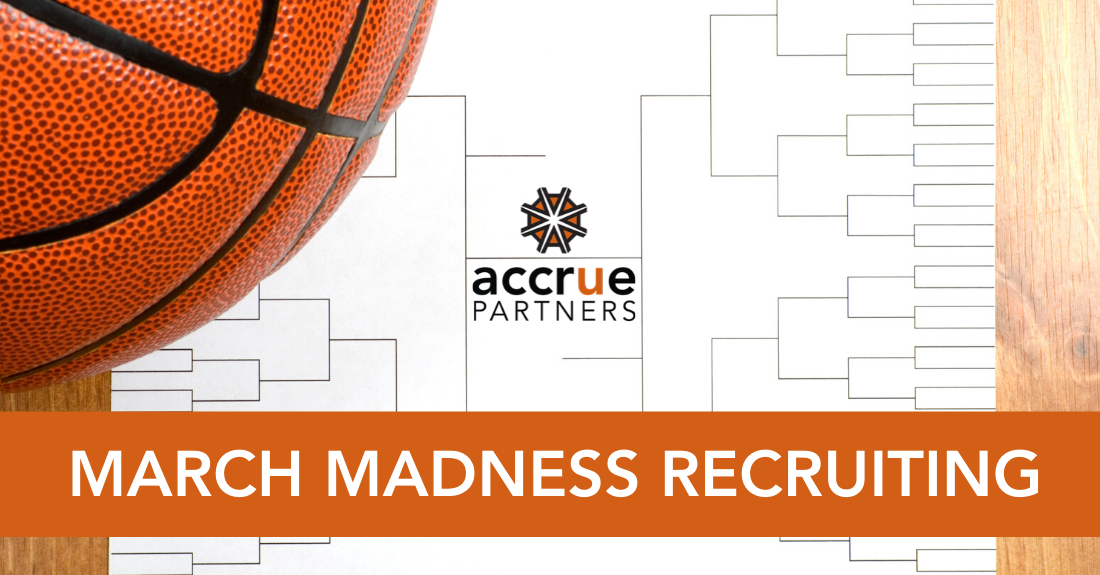 March marks the launch of March Madness. Throughout the month, the NCAA hosts a Division I basketball tournament where 68 college teams from across the nation have the chance to battle it out for the right to be crowned the next national champion. The madness stems from filling out brackets and ranking teams against each other. Recruiting top talent operates in a similar fashion – “brackets” are made of candidates competing for a position and they must advance through a strenuous vetting process to be chosen as the “right hire”.

The Beginning of the Recruiting Tournament

A quality agency will utilize all its resources to source a large pool of candidates both actively and passively seeking a career change. For this round, you are choosing your initial bracket by conducting an “eye test” or assessing candidates by a certain set of criteria that can be seen on paper. For the NCAA Tournament, this criterion is often stats such as the team’s win/loss record. Similarly, candidates must pass the eye test and meet certain criteria to advance to the next round of the hiring process.  Then, over the span of a couple of days, the vetting process will begin.

The Sweet 16 of Interviewing

Even if you don’t follow the NCAA Tournament, you’ve probably heard of the term “Sweet 16”. This round is when individuals truly invest in the teams they chose. Similarly, a phone interview is conducted at this stage of the hiring process. A phone screen is an important step to make sure that those who can talk the talk on paper can articulate their experience and successes in conversation. An experienced recruiter will dig deeper into the candidate’s resume by asking pinpointed questions to explore their soft and hard skills to weed out those that aren’t the correct fit for the position.

The Elite 8 of the Finalists

The Elite 8 consists of those that you believe can make it to the end. They could talk the talk but who can walk the walk better and make it into the Final Four? At this step of the hiring process, initial in-person interviews with the recruiter will slim down the bracket by ensuring that the candidates look as good as they sound. This is where a recruiter can really dive into the candidate’s personality and get a better understanding if they are a proper culture fit for the company or will be knocked out of the running for the championship.

Typically, these teams (or candidates in this case) consistently look good on paper and in action. The recruiter should be confident in presenting these four to the company. These Final Four will be scheduled in-person interviews with the company hiring managers. You may have four superior candidates, but only one will be crowned the champion and land the position.

The Championship of Winning the Offer

Ultimately, the key to March Madness success, whether it’s hoops or hiring, is dedication, diligence, research, and hard work. Sometimes, selecting the champion can be easy… but often it can be tough when presented with 4 highly skilled and qualified candidates. The right hire is the one who has surpassed expectations and demonstrated that they will be the best fit for the team. Consider if the candidate articulated how they’d help advance the company, asked informed questions, or shared relevant industry news during the interview process. Sometimes, the candidate least expected to make it to the final round of interviews comes out on top in the end.

Finding the top talent to fill your bracket can be long and strenuous but it doesn’t have to be. A partnership with an established talent acquisition agency like AccruePartners can take the guesswork out of hiring by providing 4 precisely matched candidates right out of the gate instead of a dozen candidates that sort of match up to the job.

Play smarter when seeking your next opportunity or hiring your next employee by partnering with the champions of Charlotte staffing at AccruePartners.