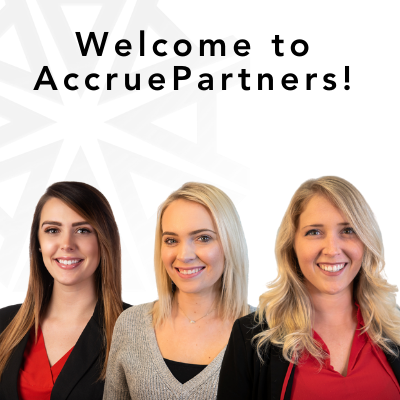 THE NEW KIDS IN TOWN

Earlier this year, we launched our new AccruePartners Jumpstart Program! This 45-day training and development program allows all new members of the AccruePartners family to learn from our organization’s subject matter experts. Our training is a boot camp on all things recruiting, sourcing, technology tools in headhunting and our 19-step business system. Ultimately, Accrue is training our future slate of recruiter talent and they get to be part of this development opportunity!

Through the Jumpstart Program, we are ensuring that each person that joins the team is set up for success. Following two weeks of classroom training, each new member will complete 90 interviews within their respective divisions. After completing the program the class will be ready to represent AccruePartners!

Amber’s driving passion is to make people happy and make a difference in their lives. After learning more about the Staffing industry she knew it would be a great fit. “Finding a career is such a huge milestone in your life…I want to be that person to change someone’s life by assisting them in their next opportunity,” she explained.

From a small town Northeast of Charlotte called Albemarle, Amber was drawn to the Queen City during college. “I went to Campbell during my freshman year of college and was always visiting my best friend at UNCC and decided to transfer my sophomore year to complete my undergraduate studies,” she told us.

“I was introduced to AccruePartners after I was reached out to on LinkedIn. I had a gut feeling about Accrue as soon as I got off the phone with Cate Pace, our Internal Staffing Manager. One thing that I will never forget is her saying how much she loves the family-like culture at Accrue and that is something I really wanted in my next position.”

Ashley is originally from Rhode Island and moved to the Queen City during high school with her family. She attended High Point University where she received a Bachelors Degree in Business Administration.

During her job search, Ashley connected with one of our recruiters in hopes to get placed. During her internal interview, she found herself even more interested in internal opportunities. She told us, “I wanted to work at AccruePartners because the passion behind the core values really stood out to me. I love that all employees here embody these core values, and feel they closely align with my own personal values.” Ashley joined the AccruePartners team initially as an RPO recruiter and was promoted with the launch of the Jumpstart Program within her first year.

She is most excited about making an impact within both the organization as well as the lives of the candidates that she is able to place in fantastic roles to further their professional experience and development.

After her upbringing in Philadelphia, PA, Kelly moved to Charlotte for college and stayed for the weather.

She had interviewed with a few staffing firms in the area but Accrue stood out among the competition. Kelly outlined, “after speaking with Cate, visiting the office for an interview, and meeting Patty and Amy I knew Accrue was the right fit for me!” Kelly is driven by our standout accolades and women-owned atmosphere which ultimately lead to her decision to join the team.

When asked what drives her passion she said, “I love working with people. Throughout my career, I’ve met and built relationships with some pretty amazing people; recruiting is an extension of that passion. As I continue to grow with the company my goal is to dig in and learn everything I can about the staffing industry. I want to help people change their lives by connecting them with opportunities they may not have known existed.”

Madeline came to AccruePartners after applying to an external role on our website. However, her interest in working at AccruePartners internally peaked throughout her interview process with our Internal Hiring Manager, Cate Pace.  She elaborated by saying, “I wanted to be at a company where I felt like a valued employee instead of just a number. I love the tight-knit dynamic of the team and the accessibility/flexibility that the business allows for all positions. Working at a women-founded, owned, and operated business is an opportunity I always hoped for and I feel lucky to be a part of.”

Madeline hopes to form meaningful relationships with clients, candidates, and coworkers to make an impact measurable by success and connections alike.

Kaitlyn is originally from Morganton, NC and was drawn to Charlotte because of her older sister who attended UNCC. She decided to follow in her footsteps and is now a 49ers alumni as well after completing her Bachelor’s in History.

Kaitlyn found AccruePartners after being connected with our Office Recruiting Manager, Heather Hybarger through a friend. She completed two contract assignments with one of our privately-held distribution clients. “The day my second role ended I received a call about the JumpStart Program. I knew I wanted my next role to be a challenge and fast-paced, recruiting sounded like a great fit! Accrue has an amazing culture and I love the energy in the office.” Kaitlyn is excited to hit the ground running and strive for continued growth within the company.

Are you interested in joining the AccruePartners team? Reach out to our Internal Recruiter, Cate Pace, today on Linkedin or by email!